Royal Mint unveils eight-kg coin for Year of the Tiger

The Royal Mint, Original Maker of UK coins, has unveiled an exclusive eight kilogram gold proof coin to celebrate the Year of the Tiger as part of its Masterworks coin range and popular Shēngxiào collection. The eight-kg gold proof coin featuring a design to celebrate Chinese New Year is a one-of-a-kind collector’s item made using a combination of traditional skills and innovative technology and is the largest coin ever produced as part of The Royal Mint’s Shēngxiào collection.

The impressive eight-kg gold proof coin was created by a team of master craftspeople at The Royal Mint, using traditional minting skills alongside the latest innovative technology. Modern techniques are called upon in the beginning with engraving machines being used to carefully cut the design onto the eight-kg coin over a period of 200 hours.

A uniquely titled ‘Master Toolmaker’ then hand works the coin, carefully papering and burnishing the surface of the metal to remove any marks made by the cutting process to elevate the finish of the design, before undergoing 100 hours of hand polishing. Finally, the 185mm coin is laser frosted for 50 hours using the latest picosecond laser technology, to selectively texture the surface giving it a matt finish showcasing the detail of the coin design.

The Lunar Year of the Tiger eight-kg coin blends elements of traditional British design and craftsmanship with ancient Chinese culture. The coin design depicts the tiger face on, and its Chinese character positioned to the right. When inspecting the design closely an additional Chinese character can be seen on the tiger’s forehead. It represents the Chinese character for king – ‘王’ – which is said to originate from the pattern on the tiger’s head. The weight of the coin, eight-kg, was selected due to the number 8 being considered the luckiest number in Chinese culture and one associated with wealth and prosperous.

Clare Maclennan, Divisional Director of Commemorative Coin at The Royal Mint said: “The Royal Mint began the Shēngxiào Collection in 2014, combining centuries of British craftsmanship and artistic skills with Chinese tradition – creating the first official UK Lunar coins. Ahead of Chinese New Year, we are thrilled to introduce the first ever eight-kg coin as part of the collection celebrating the Year of the Tiger and the latest in our ‘Masterworks’ series which offer unique works of art for collectors, exclusively from The Royal Mint. The coin design is a beautiful fusion of British craftsmanship and Chinese tradition featuring the tiger prominently in the centre of the design.”

The Royal Mint’s Shēngxiào Collection is a celebration of the UK’s diverse multi-cultural society, lending a unique British angle to this ancient custom. The Chinese zodiac follows a 12-year cycle with each year characterised by a different animal. Ancient legend tells of a Great Race between the animals. Several variants of the story exist, but in one popular interpretation the Jade Emperor, ruler of the heavens, declared that the first 12 animals to sign up would be eligible to take part, and the order they finished in would determine the order of the lunar calendar. 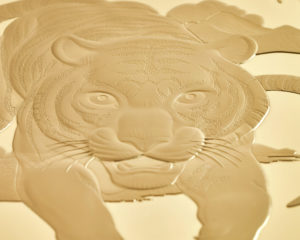 The tiger is considered one of the most beloved and respected creatures in Chinese culture. Characteristically brave and unyielding, the tiger is one of the most significant symbols in Chinese culture. Hailed for symbolising power, strength, and bravery, the animal also represents majesty and righteousness. Those born in the Year of the Tiger are thought to possess many of these traits and are said to be confident and courageous, meaning people born under this sign are thought of as natural leaders.

In addition to the eight-kg gold proof coin, The Lunar Year of the Tiger collectable coins are also available in a range of precious metals and base metal finishes from £13. Visit www.royalmint.com/lunar to view the full collection.