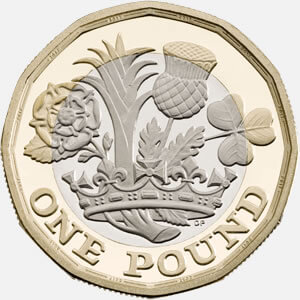 The Royal Mint is striking one billion 12-sided £1 coins (shown above) in preparation for their launch in March.

The Royal Mint has unveiled the circulating coin designs slated to appear on Britain’s coinage this year, and there’s a “strong pioneering theme linking them all,” the mint says.

Among the most noteworthy 2017-dated British coins is the country’s new bi-metallic, 12-sided £1 coin, which will replace the “round pound.” The mint claims it “will be the most secure coin in the world when it makes its way into the nation’s pockets in March 2017.” Its design, by David Pearce, features the flora of the four nations of the U.K. emerging from a coronet.

“This is a particularly significant year in Royal Mint history as we welcome in the new 12-sided £1 coin, with its innovative security features,” said Dr. Kevin Clancy, director of the Royal Mint Museum. “This year we also mark the achievements of Jane Austen, Sir Isaac Newton and The Royal Flying Corps—all pioneers in their own field. The British public should start to see these coins appearing in their change from Spring 2017.” 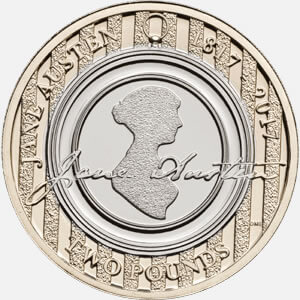 According to the Mint, more than one billion 12-sided £1 coins are being struck for the launch in March.

The Jane Austen £2 coin celebrates the Hampshire author who in 1811 had her first novel, Sense and Sensibility, published anonymously. Her works also include Pride and Prejudice and Emma. Her books have been translated into more than 40 languages with almost 100 film and television adaptions taking her works to new heights of fame across the globe. She’s remembered as a renowned author across the world. 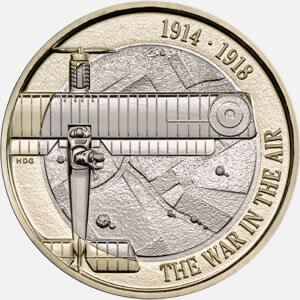 This £2 coin is the fourth of a five-coin series honouring First World War aviators.

This year, the Royal Mint will continue its First World War centenary commemorations with the fourth £2 coin of a five-coin series, which honours Great War aviators.

At the outbreak of the First World War, few people believed aircraft would play a major role in the conflict. The Royal Flying Corps (RFC) grew from a force of a few hundred planes in 1914 to a huge, independent air force. Its personnel risked their lives testing new technology to its limits and endured the previously unknown effects of altitude, G-forces and freezing temperatures—as well as the dangers presented by the war. In 1918, the RFC became the Royal Air Force.

Sir Isaac Newton will be commemorated on this 50-pence coin later this year.

Later this year, the mint will also commemorate Sir Isaac Newton on a 50-pence coin.

Newton was an intellectual giant of the 17th century’s scientific revolution. He also played a vital role as Master of The Royal Mint for more than 30 years. Renowned for his zeal in tackling counterfeiters, improving assaying techniques and refining weights and measures to an exacting standard never seen before, his report of 1717 paved the way for the introduction of the gold standard. Newton used mathematics and rigorous experiments to provide universal descriptions of how nature worked. The coin design is inspired by the scientific theories relating to planets and bodies in space, detailed in Book One of Newton’s Principia Mathematica.