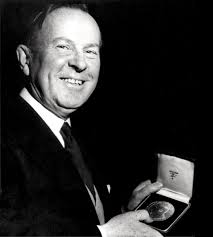 Lester B. Pearson with his Nobel Prize in 1957.

Born in the township of York, Ont., (now a part of Toronto), as Lester Bowles “Mike” Pearson, he was a Canadian professor, historian, civil servant, statesman, diplomat, soldier, and politician. 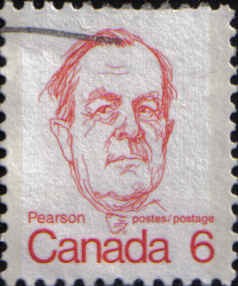 Canada Post issued this six-cent stamp of Pearson in 1973.

He won the Nobel Prize for Peace in for organizing the United Nations Emergency Force to resolve the Suez Canal Crisis. He was the 14th Prime Minister of Canada from April 22, 1963 to April 20, 1968, as the head of two back-to-back Liberal minority governments following elections in 1963 and 1965.

During Pearson’s time as Prime Minister, his Liberal minority governments introduced universal health care, student loans, the Canada Pension Plan, the Order of Canada, and the new Flag of Canada.

Pearson also convened the Royal Commission on Bilingualism and Biculturalism, and he struggled to keep Canada out of the Vietnam War. In 1967, his government passed Bill C-168, which abolished capital punishment in Canada de facto – by restricting it to a few capital offenses for which it was never used, and which themselves were abolished in 1976.

With these accomplishments, together with his groundbreaking work at the United Nations and in international diplomacy, Pearson is generally considered among the most influential Canadians of the 20th century.

For the stamp and coin collecting communities, Pearson was featured on a red six-cent stamp on Oct. 17, 1973 and is part of the definitive set of 1973. 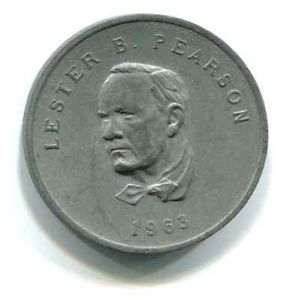 This collector medallion of Pearson was issued by Shell Canada as part of a coin-series on Canada’s prime ministers.

For a prime minister who led a lot of positive changes enjoyed by Canadians today like health care, the Pension Plan and Canada’s flag, to date, Pearson has not been the image of any circulating coins and banknotes. However, he was featured on a  1963 sterling silver medal and was amongst 15 former prime ministers featured on collector medallions issued in the 1970s by Shell Canada.