Ted Bailey (right) is accompanied by his wife, Sandy, on the bourse of the Paris Coin Show. Bailey owned the show before selling it to its current owner Jared Stapleton in 2017, before which time it was known as the Southwestern Ontario Numismatics Show—or 'SWON.' (Submitted photo)

As the biannual Paris Coin Show returns to southwestern Ontario this Sunday, organizers are boasting another sold-out bourse with more than 50 dealer tables offering the gamut of numismatic material.

Known as the Southwestern Ontario Numismatics Show (SWON) before it was purchased by Jared Stapleton two years ago, the rebranded show is slated to return Aug. 11 in Paris, which was voted the “prettiest little town in Canada” by Harrowsmith magazine in 2017.

“It’s a packed show, and as a collector, you never know what you’re going to find,” said Stapleton, who added the show “attracts a wide spectrum of patrons,” from novice collectors to experienced veterans. 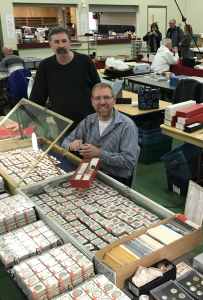 Kirk Parsons (right) is one of the roughly 35 dealers on the bourse of the upcoming show. (Submitted photo)

“It’s always a surprise, but collectors always find something – either small or large, inexpensive or expensive – for their collections.”

Also returning on Aug. 10 – one day before the show – is a live auction hosted by Geoffrey Bell Auctions. All bidders will receive a free admission coupon to the Paris Coin Show the following day; otherwise, show admission is $4, which includes a draw ticket for a Royal Canadian Mint gold coin.

Centrally located at the Paris Fairgrounds on 139 Silver St., the show will be open from 9 a.m.-4 p.m. and is about a one-hour drive from anywhere in southern Ontario. With a mix of full-time dealers plus local “vest pocket” dealers from across the region, the bourse will offer collectors an opportunity to browse about 35 dealers’ stocks without the big-city costs, Stapleton added.

“My main goal was to preserve what Ted Bailey was doing with the show,” said Stapleton, who also runs the biannual Toronto Coin Expo and owns Metro Coin and Banknote in that city’s west end.

Bailey, the dealer who formerly owned and organized SWON, hosted 42 events throughout more than two decades, beginning with the first show in 1996.

Among the top highlights of the one-session, 572-lot auction on Aug. 10 are early Bank of Canada issues, a pair of 1972 test notes and a range of chartered notes.

Lots 513 and 515 feature two Bank of Canada $5 test notes issued for the Scenes of Canada Series.

Both notes feature the Lawson-Bouey signature combination on the front – alongside Canada’s coat of arms and a portrait of Sir Wilfrid Laurier – plus the “RS” prefix.

“The rule that the first prefix letter on double prefix notes may only be associated with one specific denomination was violated once in the 1969-1975 issue,” reads the Charlton Standard Catalogue Canadian Government Paper Money (30th edition), which adds the denominational letter “R” was used for both $2 and $5 notes.

“The RS $2 and $5 notes are believed to be test notes, placed in circulation in limited quantity to test the durability of new innovations in ink or paper composition, printing procedures, or other changes.”

Among the top coinage highlights are:

The auction will be held in the Grand Ballroom of the Hampton Inn and Suite in nearby Brantford, Ont., with lot viewing from 10 a.m.-4 p.m. followed by the live auction at 5 p.m.