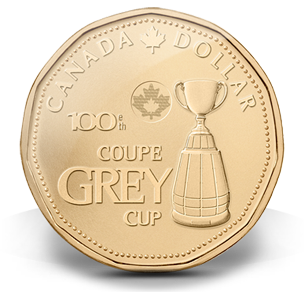 A commemorative loonie was issued by the Royal Canadian Mint in 2012 to mark the 100th anniversary of the Grey Cup.

In 1954, the ORFU officially withdrew from Grey Cup competition as its members were no longer competitive with professional teams. It was the beginning of the modern era of Canadian football, and the following year, the Canadian Football Council was formed, which became the CFL in 1958.

In 2012, the Royal Canadian Mint marked the 100th anniversary of the Grey Cup with a commemorative dollar.

“This beautiful, new $1 coin is a shining tribute to the Grey Cup’s iconic place in the history, culture and future of Canada,” said Mark Cohon, then commissioner of the CFL.

Designed by Mint engravers, the $1 circulation coin was used during the coin toss prior to each CFL game in the lead-up to—as well as during—the 100th Grey Cup game in Toronto on Nov. 25, 2012.

Other numismatic products were also produced to celebrate the 100th Grey Cup. These include a unique collectable set for each CFL team featuring a painted commemorative coin designed by Canadian artist Filip Mroz, two commemorative stamps and a special place to collect the circulation coin. A total of 10,000 limited-edition silver dollars were also issued featuring a stylized Grey Cup.

“And the stunning team coins and collections underline the important role our league plays in the life of Canadians and their communities,” said Cohon, who resigned in January 2015.

“I want to thank the Royal Canadian Mint and our fans, who I know will embrace this and everything we’re doing to celebrate this year of the 100th Grey Cup with enthusiasm and passion.”