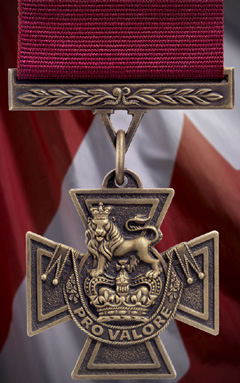 The Canadian Victoria Cross was officially unveiled on May 16, 2008.

On today’s date in 1900, the Canadian Mounted Rifles, the Royal Canadian Dragoons and one section of the Royal Canadian Field Artillery’s “D” Battery – with two 12-pounder field guns – joined a British military column during the Second Boer War.

In the early hours of the morning on Nov. 6, the formation was travelling south out of the eastern Transvaal town of Belfast, South Africa, to disperse a large Boer commando group camping about 30 kilometres away (near the Komati River). After forcing the Boers back across the river, the British and Canadian soldiers camped overnight near a farm named Leliefontein; however, because the Boer forces were stronger than expected, British Major-General Horace Smith-Dorrien issued orders for a return to Belfast in the morning.

The commander of the Boer forces rallied reinforcements and planned to meet the British column, which he assumed would continue its advance the following day.

The engagement that took place on the following day became known as the Battle of Leliefontein. Three members of the Royal Canadian Dragoons – Sergeant Edward James Gibson Holland, Lieutenant Richard Ernest William Turner and Lieutenant Hampden Zane Churchill Cockburn – were eventually awarded the Victoria Cross for their actions that day. 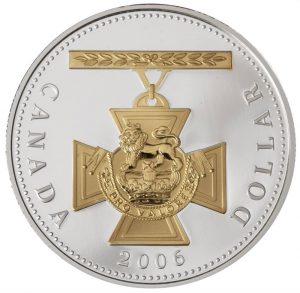 In 2006, the Royal Canadian Mint issued a $1 gold-plated coin (shown above) as well as a $1 silver Proof coin celebrating Canada’s Victoria Cross.

To disguise his withdrawal, Major-General Smith-Dorrien assigned the Royal Canadian Dragoons and the two 12-pounder field guns of “D” Battery as his rearguard. This assignment was under the command of Lieutenant-Colonel François-Louis Lessard, of the Dragoons.

“The Dragoons were seriously under strength, mustering no more than one hundred men and a horse-drawn Colt machine gun. However, the Canadian horsemen and artillerymen were experienced, and had worked together long enough to operate as a team,” reads the Canadian War Museum website. “The Dragoons deployed in a line four or five kilometres across covering the rear of the departing British column with the guns and the machine gun in the centre.”

Once the Boer commander realized the British column was retreating, the commando group’s reinforcements began to focus on the Canadian rearguard provided by the Royal Canadian Dragoons and the “D” Battery field guns. A series of attacks on the rearguard culminated in a charge by 200 mounted Boer fighters “firing from the saddle,” according to the Canadian War Museum, adding there were concerns the Canadian line would break and the two field guns would be captured.

“The charge was only beaten off by the gallantry of a small party of Dragoons and the fire of the machine gun, which killed the two Boer commanders. The Boers continued to attack, but the loss of their leaders had disoriented them, and as the Canadians neared the rear of the retreating British column, the Boers lost momentum.”

“Leliefontein was the most desperate situation faced by Canadians during the war,” concludes the website. “The number of decorations, including Victoria Crosses to Lieutenants H.Z. C. Cockburn, R.E.W. Turner and Sergeant E.J. Holland, all of the Royal Canadian Dragoons, attests to the intensity of the fighting.”

The Victoria Cross is the highest decoration of the U.K. honours system and is awarded, sometimes posthumously, for gallantry “in the face of the enemy” to members of the British armed forces. Instituted 1856 by Queen Victoria, the Victoria Cross was was previously awarded to Canada and other Commonwealth countries, many of which—Canada included—have established their own honours system.

There were 96 Canadian recipients of the Victoria Cross altogether.

The design of the Canadian medal is derived from the British original, which was the creation of Prince Albert of Saxe-Coburg and Gotha, the husband and royal consort to Queen Victoria. Canada’s Victoria Cross is a cross pattée with straight arms measuring 38 millimetres across in each direction and made out of a bronze-coloured alloy. The obverse bears a lion crowned and statant guardant (similar to the design of the Royal Arms of Canada) standing upon a representation of St. Edward’s Crown, which rests above a semi-circular scroll. The reverse features a raised circle for engraving the date of the act of gallantry along with the name, rank, and unit of the recipient. The medal is suspended from a link that’s attached to a bar adorned on the front with laurel leaves, and on the reverse with the name, rank, and unit of the medal’s recipient, all cast in the same metal as the medal. The ribbon—also 38 mm wide—is solid crimson in colour. The medal also includes Canadian flora as decoration as well as the aforementioned Latin inscription, which symbolizes Canada’s two official languages.

Canada’s professional armed forces were officially only seven years old at the time of the Battle of Leliefontein as they were created by the Militia Act of 1883.

In 1870-71, the British armed forces pulled most of its regular troops out of Canada, which – less than five years after Canadian Confederation – was left to perform its own military functions.

Initially, the Canadian government created two artillery schools rather than a standing army, and these schools allowed militia artillery units to maintain some standards, albeit with no professional instruction.

In 1883, the Militia Act attempted to remedy the situation by providing a professional force of up to 750 men across three batteries of artillery, one troop of cavalry and three companies of infantry. These were to serve as “practical schools of military instruction.”