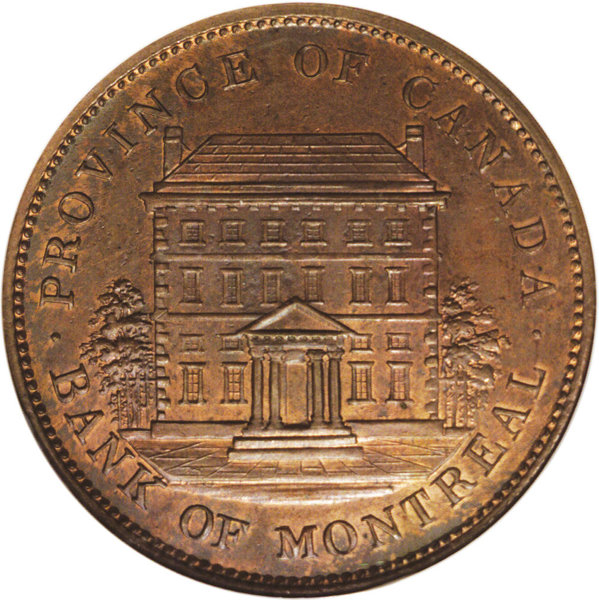 A penny was issued by the Bank of Montreal in 1837. (Photo by Heritage Auctions)

Earlier that year, on June 23, nine Montreal merchants – prominent businessman John Richardson among them – signed articles of association to establish the bank. With £250,000 capital, BMO (then known as the Montreal Bank) would eventually issue Canada’s first domestic currency when it opened its doors on Nov. 3, 1817.

The following year, the bank opened agencies in London and New York as well as offices in Québec and the Upper Canada communities of Kingston, York, Queenston and Amherstburg.

By 1859, BMO was Canada’s largest financial institution with permanent branches in New York and Chicago.

In Canada, the bank currently operates as BMO Bank of Montreal and manages assets of more than $300 billion. With more than 900 branches worldwide, the bank serves more than seven million customers.

Nearly 200 years ago – before a single steamship had crossed the ocean, or a single railway could be built – BMO sparked the transition of Canada’s domestic trade, which evolved from the barter system into today’s modern system of finance.

BMO followed the Scottish system of banking, of which Richardson (a Scottish Quebecer) was familiar. One of the best features of this system, which was later co-opted by English bankers, was the ability to maintain numerous branches with fewer banks holding significant capital.

Immediately after BMO opened its first bank in the city from which it took its name, it began preparations to issue new paper and metallic currency to replace the various foreign currency that made up Canada’s economic system at the time. What’s more, it introduced the branch system of banking, and within months, another establishment developed into a full-fledged branch in the city of Québec and another in the town of Kingston.

It was the beginning of modern banking in Canada.