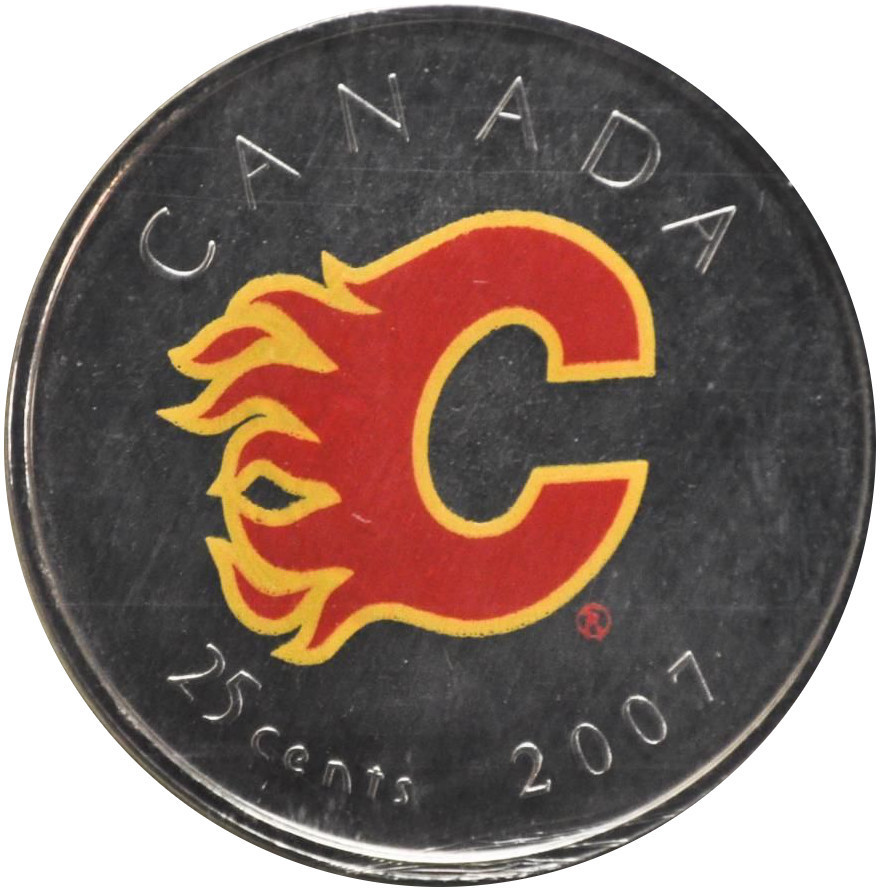 The Calgary Flames were celebrated on a 25-cent silver coin issued by the Royal Canadian Mint in 2007.

The Flames hockey club saw its beginnings during the NHL’s first pre-emptive strike against the upstart World Hockey Association (WHA).

In December 1971, the NHL granted a team to Long Island – the New York Islanders – to keep the WHA’s New York Raiders out of the newly built Nassau Coliseum. To balance the schedule, the NHL awarded another team to an Atlanta-based group, the owners of the NBA’s Atlanta Hawks, headed by prominent local real estate developer Tom Cousins.

Cousins named the team the Flames after a U.S. Civil War fire that nearly destroyed Atlanta.

Relatively successful early on, the Flames made the playoffs in six of eight seasons in Atlanta; however, the success didn’t carry over to the playoffs, as the Flames won only two post-season games during their time in Atlanta.

In 1980, with Cousins experiencing considerable financial difficulty, the team was put up for sale. With few serious offers locally, Cousins welcomed an offer from Canadian entrepreneur and former Edmonton Oilers owner Nelson Skalbania.

Skalbania was fronting a group of Calgary businessmen, and after a last-ditch effort to keep the team in Atlanta fell short, Cousins sold the team to Skalbania for $16 million USD—a record for an NHL team at the time.

On May 21, 1980, Skalbania announced the team would move to Calgary. He chose to retain the Flames name, feeling it was a good fit for an oil town like Calgary, while a flaming “C” replaced the flaming “A” logo.

Skalbania sold his interest in 1981, and the Flames have been locally owned ever since. 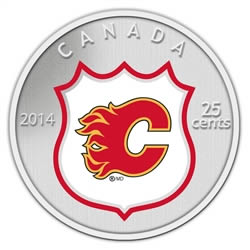 A 25-cent painted cupro-nickel coin featuring the Calgary Flames’ logo was issued by the Mint in 2014.

In 2007, the Royal Canadian Mint issued a 25-cent silver coin featuring the Calgary Flames. The coin had a weight of 4.4 grams and a 23.9-millimetre diameter.

In 2014, the Mint issued an NHL coin and stamp gift set featuring the Calgary Flames. Included in the set was pop-up packaging incorporating both the Calgary Flames coin and two commemorative stamps. With a limited mintage of 6,000 pieces, the painted cupro-nickel coin features a coloured team logo captured within the NHL shield on a frosted background. A set was issued for each of Canada’s seven NHL teams.

Another coin, this struck in silver with a $10 face value, was issued by the Mint in 2015.

The next year, the Mint issued another coin featuring the Calgary Flames. The $10 silver coin was struck in 99.99 percent pure silver, with a diameter of 34 millimetres and a weight of 15.87 grams. The coloured reverse design features a stylized silhouette of a hockey player on a rink along with the Calgary Flames logo coloured in the official team colours. The reverse is engraved with the word “CANADA,” the year-date “2015” and the face value “10 DOLLARS.”