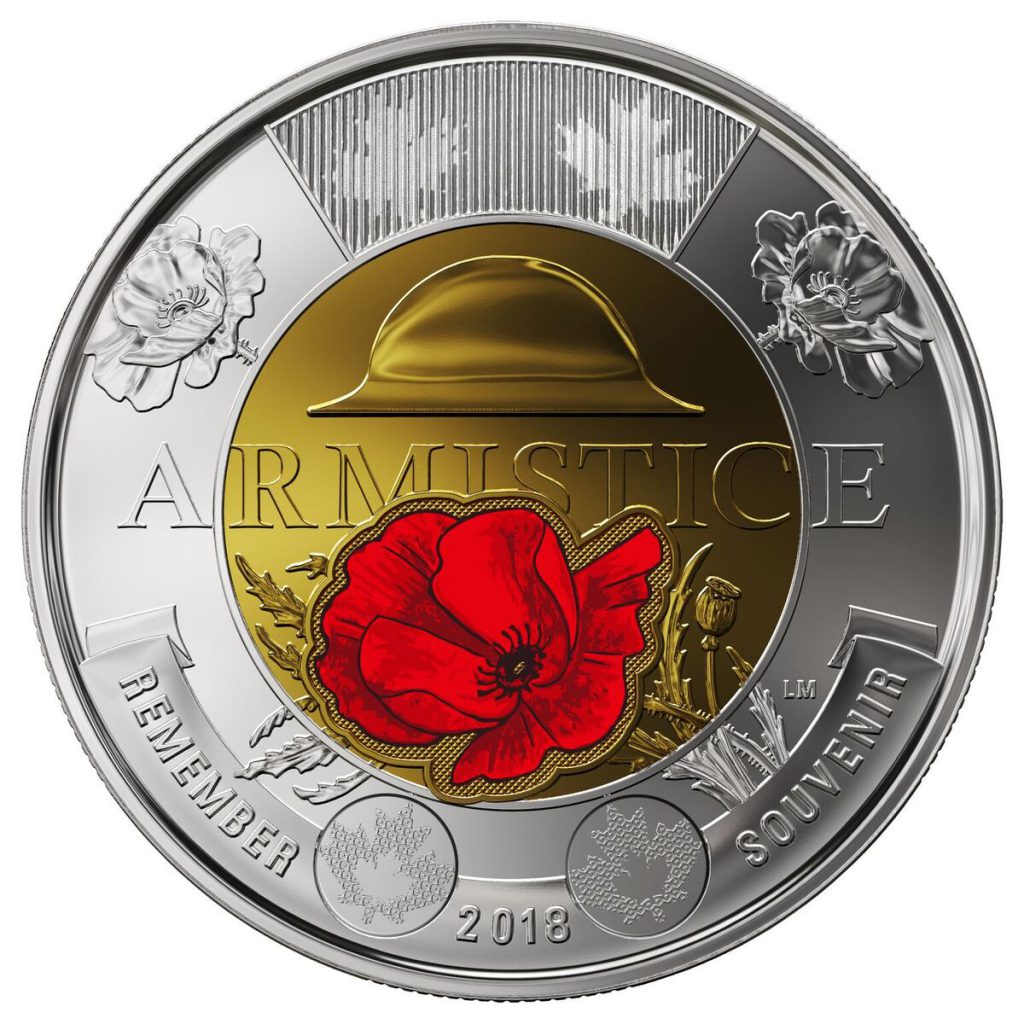 A total of three million $2 circulation coins, including two million selectively coloured pieces (shown above), will be issued by the Royal Canadian Mint beginning today.

A $2 circulation coin marking the 100th anniversary of the First World War Armistice was unveiled this morning by the Royal Canadian Mint.

Recalling the signing of the historic peace treaty that officially ended the Great War on Nov. 11, 1918, the coin was unveiled at the Mint’s Winnipeg facility before invited guests as well as the men and women who produced this keepsake of a crucial event in Canadian and world history. A total of three million coins, including two million selectively coloured and one million unpainted, will be issued nationwide.

“For a nation of eight million people, Canada’s efforts in the First World War were remarkable. More than 650,000 Canadian men and women served in uniform during the First World War, with more than 12,000 comrades from Newfoundland and Labrador also answering the call to arms,” said Finance Minister Bill Morneau. “By issuing a circulation coin honouring the 100th anniversary of the Armistice, the Mint is helping to preserve the memory of all Canadian veterans, who continue to remind us that peace and freedom are worth fighting for, even at great personal costs.” 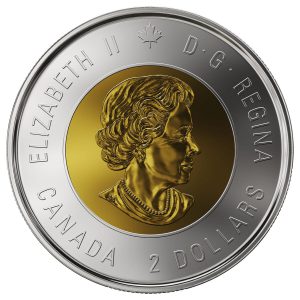 The obverse of the new $2 circulation coin depicts the right-facing effigy of Queen Elizabeth II.

Within the inner core, a soldier’s “Brodie” helmet represents the end of the First World War and serves as a solemn reminder of the many lives lost during this unprecedented conflict. Below the helmet lies a large poppy, the official bloom of remembrance inspired by the iconic war poem In Flanders Fields written by Canadian physician Lieutenant-Colonel John McCrae.

The poppy’s bright scarlet colour is re-created on selectively coloured versions of the coin. Two more poppies are engraved on the outer ring, which includes a banner bearing the bilingual words “REMEMBER,” “SOUVENIR” and the year “2018.”

“The Mint is proud to share the story of bravery, sacrifice and determination, on both the battlefield and the home front, by Canadians, Newfoundlanders and Labradorians, which secured Allied victory in the First World War,” said Jennifer Camelon, interim president and CEO of the Mint. “With a new coin commemorating the Armistice, Canadians may remember our predecessors who risked their lives or made the ultimate sacrifice in the First World War to defend our values and freedoms.”

“We salute the many Canadian men and women who answer the call to serve and this year in particular, those who served in the tragic First World War,” said Royal Canadian Legion Dominion President Tom Irvine. “This significant commemorative coin will be another way to ensure we never forget their sacrifice.” 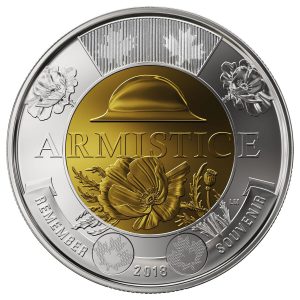 One million unpainted versions of the Armistice circulation coin will also be issued by the Mint.

Limited to a mintage of three million coins, the new $2 coin is in general circulation and will be available through public coin exchanges.

The Mint is adding to the historic commemoration of the Armistice by offering several new collector products.

A dramatic complement is the 2018-dated $25 Fine silver coin, “Lest We Forget.” This extreme-curvature coin is struck in the shape of an authentic Canadian Expeditionary Forces 1916 Mark I battle helmet. With an antique finish, random cracks and markings, the coin exhibits a realistic battle-worn appearance. The outer brim bears the legends “LEST WE FORGET,” “N’OUBLIONS JAMAIS” and is double-dated 1918-2018.  The inner contours displays the effigy of Queen Elizabeth II as well as the denomination and country of origin.

Artist Laurie McGaw has also designed a $10 Fine silver collector coin that features a war-weary soldier reflecting on the loss of his comrades as the guns of war fell silent on Nov. 11, 1918.

Earlier this year, the Mint also issued a special edition silver dollar, “The 100th anniversary of the Armistice,” designed by Jamie Desrochers. It is dominated by a towering illustration of the number “11” selectively plated in gold against a background of precisely engraved radiating lines and a laurel wreath.