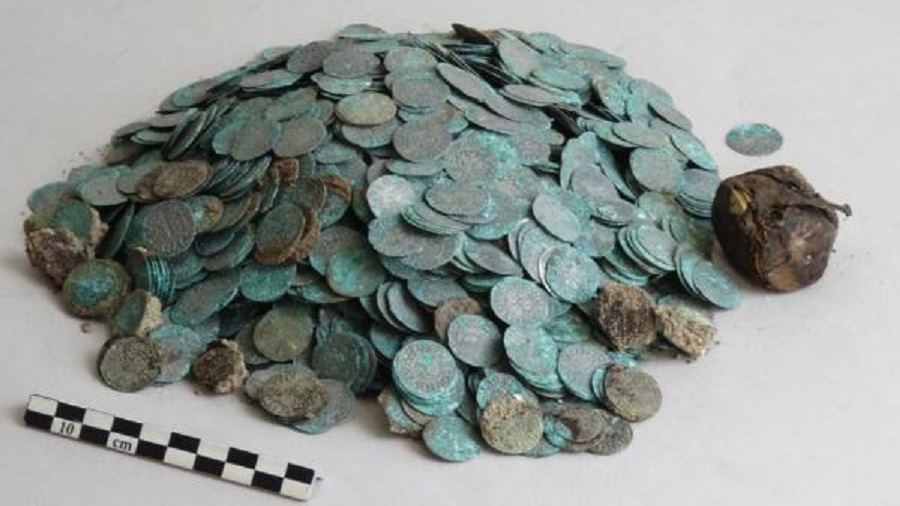 Last fall, the largest cache of silver deniers ever discovered was unearthed in France. (Photo by Anne Baud, Anne Flammin and Vincent Borrel)

Never before has such a large cache of silver deniers been discovered: Researchers

In mid-September, a large treasure—2,200 silver deniers and oboles; 21 Islamic gold dinars; a signet ring; and other objects made of gold—was unearthed during a dig at the Abbey of Cluny in the French department of Saône-et-Loire.

According to the French researchers, it’s the largest cache of silver deniers ever discovered. Furthermore, it’s the first time gold coins from Arab lands, silver deniers and a signet ring have been found hoarded together within a single, enclosed complex.

Anne Baud, an academic at the Université Lumière Lyon 2, and Anne Flammin, an engineer with the France-based National Centre for Scientific Research, led the archaeological investigation alongside a team of nine students from the university as well as researchers from the Maison de l’Orient et de la Méditerranée Jean Pouilloux.

The excavation campaign, authorized by the Bourgogne-Franche-Comté Regional Department of Cultural Affairs (DRAC), began in mid-September and ended in late October. It was part of a vast research program focused on the Abbey of Cluny.

Students in the Master of Archaeology and Archaeological Science program at the Université Lumière Lyon 2 have been participating in archaeological digs at the Abbey of Cluny since 2015. This experience in the field complements their academic training and offers insight into professional archaeology.

At the site, the team discovered a treasure consisting of: 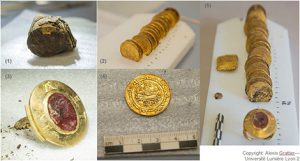 “This is an exceptional find for a monastic setting and especially that of Cluny, which was one of the largest abbeys of Western Europe during the Middle Ages,” explains a statement issued by the National Centre for Scientific Research. “The treasure was buried in fill where it seems to have stayed for 850 years.”

“It includes items of remarkable value: 21 gold dinars and a signet ring, a very expensive piece of jewelry that few could own during the Middle Ages. At that time, Western currency was mostly dominated by the silver denier. Gold coins were reserved for rare transactions. The 2,200 or so silver deniers, struck at Cluny or nearby, would have been for everyday purchases. This is the largest stash of such coins ever found.”

“The fact that Arab currency, silver deniers, and a signet ring were enclosed together makes this discovery all the more interesting.”