“The King of Canadian Coins” is set to cross the block this Friday in an unreserved public auction hosted by Alberta’s Scribner Auction.

One of only about 75 examples believed to exist, the 1921 half-dollar will cross the block as Lot 294 of Scribner’s latest “Coin and Currency Auction.” It was consigned by Wymond Hazelwood, owner of Brick Road Collectibles in Rocky Mountain House, Alta., which is about 350 kilometres west of Scribner’s headquarters in nearby Wainwright.

“We’re excited because it’s a rare and exciting coin, but we’re also excited because he had every opportunity to choose any other auction company that might have had more experience or has been doing it longer,” said Scribner owner and auctioneer Katrina Scribner.

In business since 2000, Scribner only offers unreserved auctions, something its consignors must agree with, too.

“I told him, ‘Let’s get a fair market value as best as we can for that coin, all from this little town in western Canada.’”

The auction begins on Nov. 22 at 5:30 p.m., with live bids being taken online through iCollector as well as from the floor at Scribner’s location on 121 15th Ave. A live audio stream will also be offered through scribnernet.com.

In addition to the coin having no reserve price – that’s the consignor’s lowest acceptable selling price – Scribner is also forgoing a buyer’s premium.

The coin is certified as Very Good-10 by Professional Coin Grading Service and is estimated at $50,000-plus. 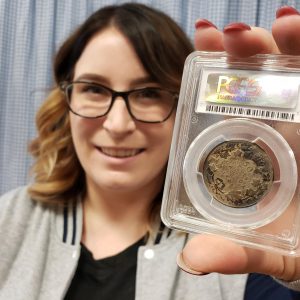 Auctioneer Katrina Scribner shows off the coin, which is certified by Professional Coin Grading Service as Very Good-10.

As the second decade of the 20th century was drawing to a close, the demand for half-dollars, a denomination first introduced to Canada six decades earlier, was waning.

The Charlton Standard Catalogue of Canadian Coins lists a mintage of 206,398 pieces for the denomination’s initial run in 1870. A lack of demand, however, led to only about 28,000 pieces being issued from 1921-29.

In 1920, the coin’s silver content was decreased to 80 per cent from its former sterling standard of 92.5 per cent. The following year, demand for the half-dollars dropped and the entire 1921 mintage – more than 200,000 coins – was held in storage by the Royal Canadian Mint. There they remained for eight years, until 1929, when the half-dollar made a brief comeback.

Concerned people might suspect a large quantity of 1920-21 half-dollars – suddenly circulating in 1929 – to be counterfeit, Mint officials decided to melt and recoin the stockpiled issues from nearly a decade earlier.

It’s believed only 75 of the 1921-dated half-dollars survived the melting pot (some through the sale of specimen sets and others through circulation strikes sold to visitors of the Mint).

Although she’s auctioned other rarities, including another 1921 circulation coin – the five-cent “Prince of Canadian Coins” – Scribner said “nothing compares to ‘The King.’”

“It’s a huge feather in our cap, and I hope it’ll show people they can trust a smaller auction company. A lot of out Canadian collectors do hire auction companies in the U.S.; you don’t have to.”

Like most Canadian auction houses, Scribner uses an online platform for Internet bidding.

“It doesn’t matter where we are anymore; we’re open to all of North America. I’d like to see more Canadian collectors and estate managers try a Canadian auction company and do more business at home,” said Scribner, who added it’s “another example of where the coin could’ve ended up south of the border or in the east.”

Despite being in a town of about 6,000 people – a number that can double depending on the exercises happening at the town’s Canadian Forces Base – the auction house is only two hours from Edmonton, where there’s an active numismatic scene that includes the Edmonton Numismatic Society.

“We’re always able to get decent amounts of people in house bidding on coin and currency,” Scribner said, adding her husband Kevin is a “very entertaining auctioneer.”

“He doesn’t stop, and while entertainment is a huge factor, he’s also quite fast,” she said.

Kevin learned from his father, Ron, who owned a successful agricultural business and decided – at the age of about 50 – to chase a lifelong dream.

After graduating from an auction school, Ron entered the business in 2000 followed by Kevin and Katrina in 2004.

“We’re getting emails and phone calls about this coin for sure,” said Katrina, about the upcoming sale of the half-dollar, “and we expect live bidding to be strong.”

During the Nov. 22 live auction, people can also preview items to be offered by Scribner the following day in another collectibles auction.