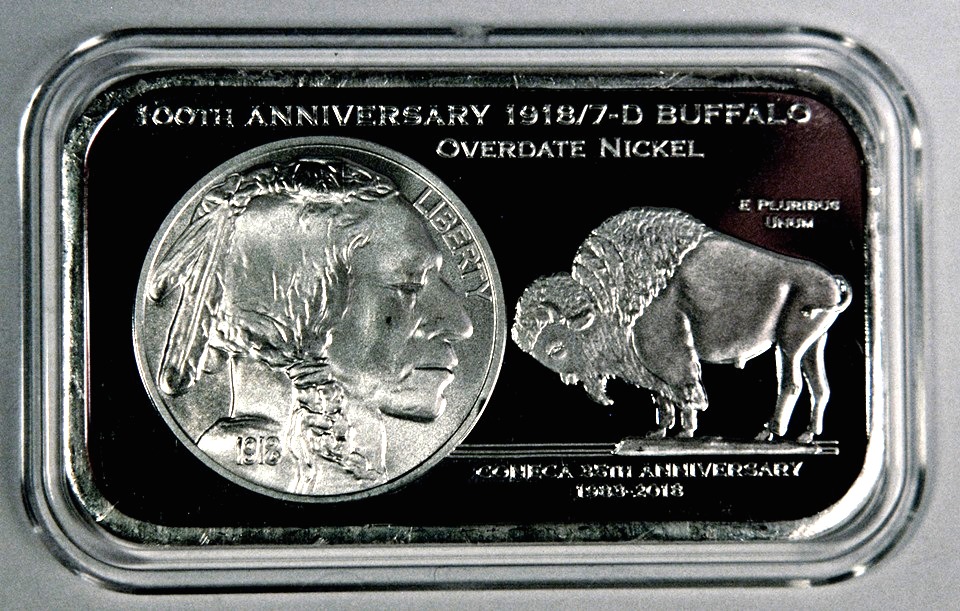 A regular one-ounce silver bar with a mintage of 125 pieces is among three options being offered by the Combined Organizations Of Numismatic Error Collectors Of America to mark the 100th anniversary of the 1918/7-D Buffalo nickel 'overdate.'

The Combined Organizations of Numismatic Error Collectors of America (CONECA) is celebrating the 100th anniversary of the 1918/7-D Buffalo nickel “overdate” on a one-ounce silver bar offered in three versions.

In deciding which one of two coins – the 1918/7-D Buffalo nickel or the 1918/7-S “Standing Liberty” quarter – to honour last year, CONECA members ultimately decided to have both minted.

“However, we felt that offering two bars at one time could break the bank for some potential buyers,” reads a recent statement issued by the U.S.-based error-collecting group.

“So we have been sitting here with the 1918/7-D Buffalos for about a year and decided to offer them for sale now so that those who want them in time for holiday gift-giving have plenty of time to order.”

The bars feature the obverse of the 1918/7-D Buffalo Nickel to the left and a view of the Buffalo motif found on the reverse of the coin to the right. This bar also marks CONECA’s 35th anniversary, which is noted on the lower-right side of the bar. All bars are serial numbered – with lowest numbers distributed first – and marked “One Ounce .999 Fine Silver” on the reverse.

A ‘cancelled die’ one-ounce silver bar with a mintage of 35 pieces is also being offered to mark the 1918/7-D Buffalo nickel’s centennial.

The bars are available in three options, including:

The enamelled option was struck with a different reverse die “to make it even more special,” according to the CONECA statement. 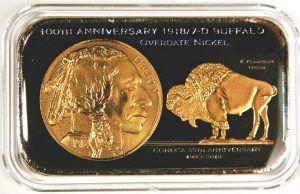 Lastly, an enamelled one-ounce silver bar with a black background enhanced with 24-karat gold on the coin designs has a mintage of 35 pieces.

The CONECA “Medals Program,” which now includes bars, was the brainchild of its 2003 board of directors not only to celebrate its anniversaries and other events but as a way of raising funds for the club with the specific purpose of preventing a rise in membership dues.

In 2003, CONECA’s annual dues were $20; however, officials demonstrated dues needed to be raised to $30 if the club was going to continue to exist. A compromise was hammered out with annual dues raised to only $25 with several board members committing themselves to projects to help defer the necessary funds to keep the club running without raising dues again the next year.

They will be available to members and non-members alike, but members will get first grabs at the enamelled and cancelled die bars, which sold out in 11 days for the 1955/55 silver bar program three years ago (and after only weeks for the Standing Liberty last year).

Non-members may join CONECA for $25 a year and buy bars at member prices.

There will be a limit of one bar a person on the enamelled and “cancelled die” bars until after Dec. 1 in order to give all members a chance to acquire one.

Advise Motley if you want more than bar one and he will contact you after Dec. 1 if any remain.

There are no quantity restrictions on the purchase of regular silver bars, although all 125 of the 1955/55 “doubled die” cent bars minted in 2015 sold out within 31 days of the offering.