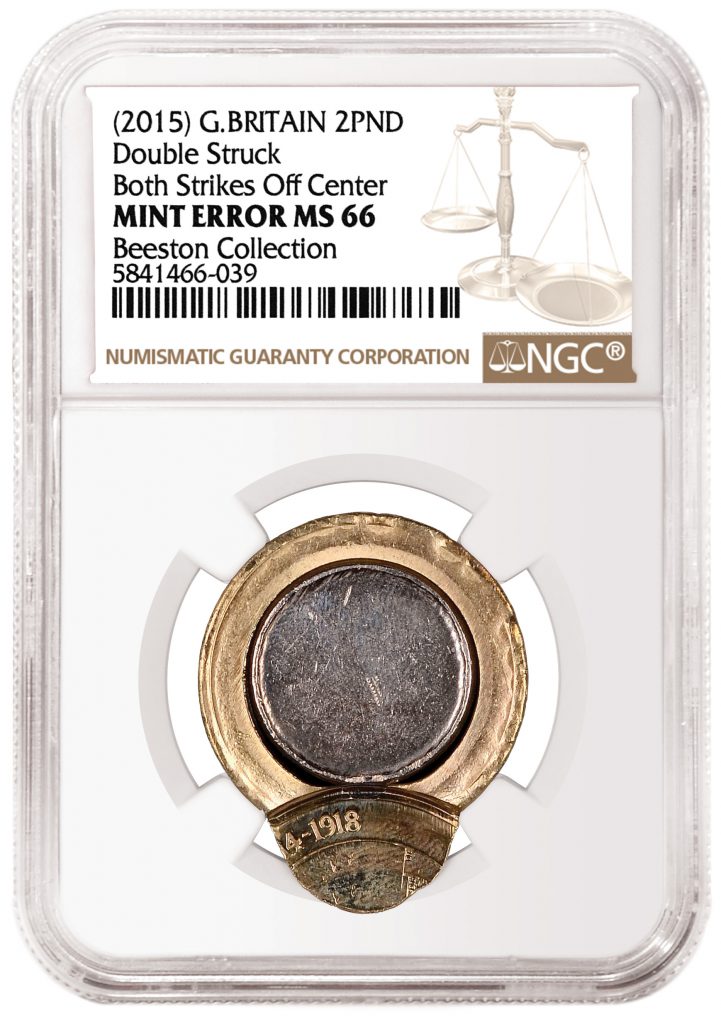 A 2015 British £2 coin is double struck with both strikes off-centre.

The Beeston Collection includes many types of unusual and appealing errors, nearly all of which are from Britain; however, some examples are from Jersey, Isle of Man, Gibraltar, Guernsey and Ireland. Assembled by Michael Beeston over 20 years, the entire Beeston Collection is shared in the NGC Registry, an online platform where collectors can showcase their coins. 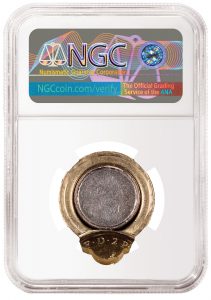 Struck on the correct bimetallic planchet, the £2 coin is elongated because only a small portion of the dies struck the planchet near its edge.

The collection is “the most exciting group of British mint errors that I have ever seen,” according to NGC Grading Finalizer David Camire, a mint error expert who oversaw the certification of Beeston’s coins.

“It stands as a testament to the diligence of the collector in assembling such a unique set of coins,” added Camire. “The collection includes many rare types, some of which I have never encountered on British coins.”

One example showing the dramatic potential of mint errors is a 2015 British £2 coin double struck with both strikes off-centre. 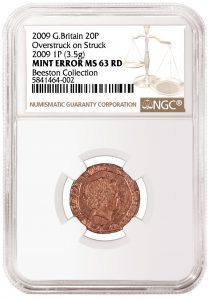 A 2009 British 20-pence coin is overstruck on a struck penny.

The coin was struck on the correct bimetallic planchet, but only a small portion of the dies actually struck the planchet near its edge, elongating it. Scantly struck, the coin could only be dated because of the birds seen near “1918.” It is graded Mint State-66.

The Beeston Collection also includes examples of errors of coins overstruck with the dies of a different denomination. Among them is a 2009 British 20-pence piece overstruck on a struck penny. It is graded Mint State-63 Red. On this error, the letters for the denomination of “ONE PENNY” can be seen to the right of the queen’s portrait from the obverse of the 20-pence dies. On the other side of the coin, the letters for the denomination “TWENTY PENCE” are clearly struck over the letters “TH II D G,” which are part of the inscription “ELIZABETH II D G REG.”

The letters for the denomination ‘TWENTY PENCE’ are clearly struck over the letters ‘TH II D G’ on the 2009-dated 20-pence piece overstruck on a struck penny.

For Canadian collectors, this error would be similar to a planchet struck with the correct one-cent design and then struck again with the five-cent design; however, the diameters of the British penny and 20-pence coin are much closer (the copper-plated steel penny is 20.3 millimetres while the cupro-nickel 20-pence coin, designed for a heptagonal planchet, is 21.4 millimetres).

In rare instances, a coin is overstruck with dies used to strike the coins of a different country.

This is the case with a 2009 British two-pence coin overstruck on an Egyptian £1 coin. It is graded Mint State-65. The dies with the British design struck the coin last, and their design can be clearly seen; however, trace amounts of the design originally imparted by the Egyptian dies can be distinguished near the edge of both the obverse and reverse. This includes letters in the words “ONE POUND,” which appear faintly above the queen’s head. Although both the British and Egyptian coins have diameters between 25 millimetres and 26 millimetres, a bimetallic planchet was not supposed to have been used for this British coin, making the error even more dramatic. 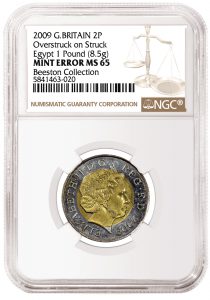 A 2009 British two-pence coin is overstruck on an Egyptian £1 coin.

Another exceedingly rare two-country double-denomination error is a 2013 British 20-pence coin overstruck on a 2012 Trinidad quarter. Most of the characters in “REPUBLIC OF TRINIDAD AND TOBAGO” and 2012 are easily identifiable near the edge of the reverse.

The Beeston Collection also features several errors in which parts of the coin are missing, including a 2008 British 10-pence coin struck on a defective planchet. It is graded Mint State-65.

A large portion of the right side of the coin is missing, with the break on the obverse following Queen Elizabeth’s forehead and nose. This coin entered the collar with the now-missing portion because otherwise, the incredible force of the dies would have pushed metal smoothly into the void. 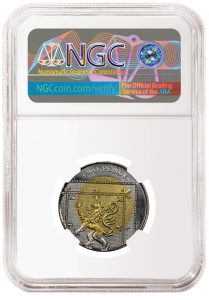 The dies with the British design struck the coin last, and trace amounts of the design originally imparted by the Egyptian dies are seen near the edge of both the reverse (shown) and obverse.

Sometimes, the strike and planchet are both correct, but something comes between the dies and the planchet.

This error is called a strikethrough, and the Beeston Collection contains several examples, including a 1969 British 50-pence coin whose reverse was struck through a fragment of brass, which it retained.

A 1978 British 50-pence coin whose obverse was struck through a previously struck metal fragment is also part of the collection.

These two errors are graded Mint-State 63 and Mint State-64, respectively.