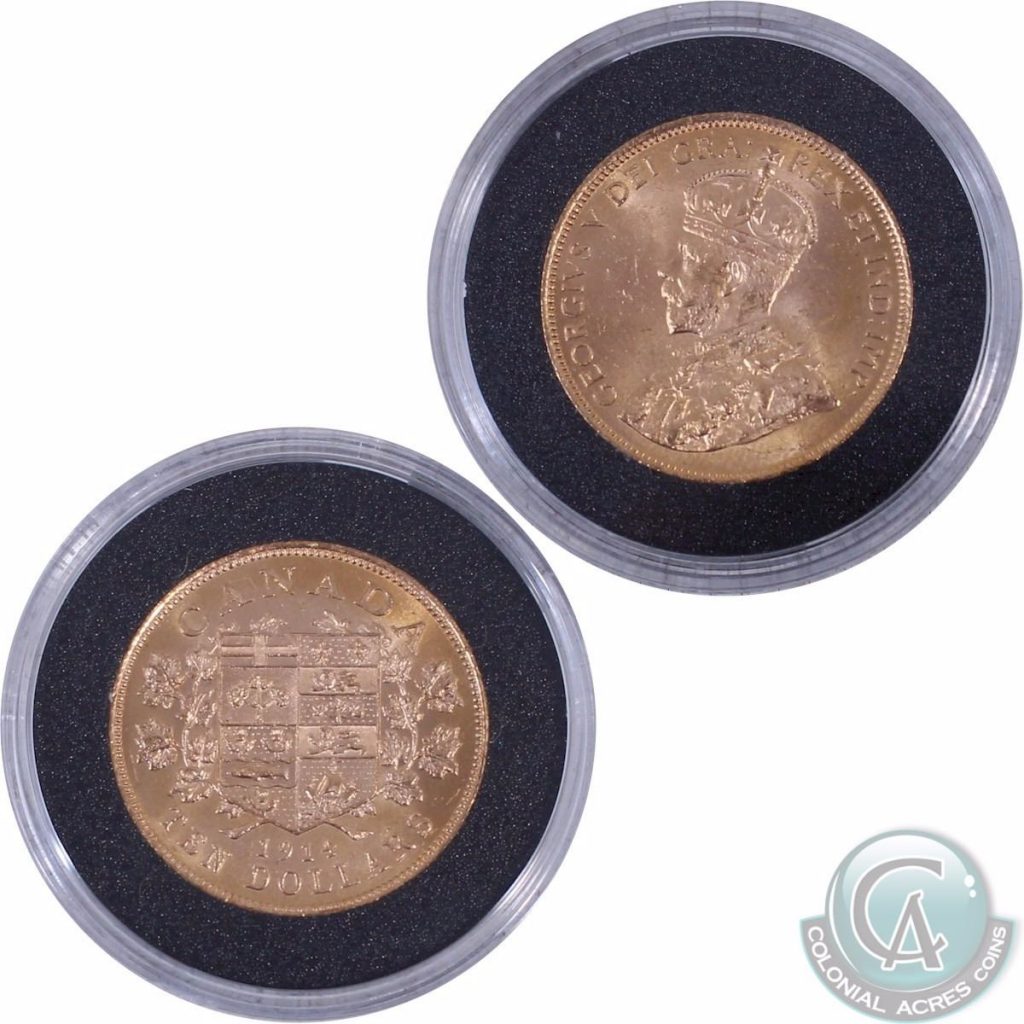 Earlier this week, a trio of hand-selected gold coins struck in the early 1900s highlighted an estate sale hosted by Colonial Acres Coins.

From 1912-14, the Royal Mint’s Canadian branch in Ottawa produced $5 and $10 gold coins with a purity of 90 per cent (as well as sovereigns for the British government with the now-famous “C” mint mark). Because there was little demand for these coins, they were kept out of circulation at the beginning of the First World War as the government accumulated gold reserves to finance the war effort.

The coins were stored at the Bank of Canada for more than 75 years as part of the federal government’s Exchange Fund Account. The non-Canadian gold was sold in the 1970s; however, in 2013, the Mint announced its 1912-14 $5 and $10 gold coins would be offered for sale to convert the proceeds into quality fixed-income securities. The remainder were melted. About 30,000 coins were retained in the same proportion as the Bank of Canada’s holdings.

“The 1912-14 $5 and $10 Canadian gold coins are at the source of the Royal Canadian Mint’s reputation as a world-class refiner and producer of gold coins and we are delighted that these pieces of our history are back in the spotlight after a nearly century-long absence,” said Ian Bennett, then-president and CEO of the Royal Canadian Mint. “By creating this unique opportunity to purchase Canada’s first gold coins proudly displaying national emblems, the Mint is excited to share these important artifacts with Canadians and collectors worldwide with the help of the Bank of Canada and the Department of Finance.”

The Mint offered the coins in “premium hand-selected” sets of all six denominations produced from 1912-14 in addition to selling “hand-selected” single coins. The proceeds of this sale, less a fixed management fee, was returned to the Exchange Fund Account for the purchase of high-credit quality, marketable fixed-income securities in compliance with the fund’s mandate. According to the Mint, most of the gold for the coins came from the Klondike region in 1912 and from Ontario in previous years.

All of the premium coins were hand chosen by Mint personnel for maximum eye-appeal and nearly pristine quality. Their lustre is described as exceptional and the quality of their strike as superb.