An 1874 Banque D’Hochelaga $5 banknote (Charlton 360-10-06) is among the Canadian banknotes, proofs and vignettes slated to highlight the World Currency Platinum Night Auction later this week in Philadelphia.

Of the dozens of rare notes from this Montréal bank to pass through Heritage Auctions, this is the earliest issue the Texas-based auction house has handled. It’s also, according to auctioneers, a “new discovery for the 1874 issue from this banking institution that is the first available to collectors.”

“Survivors prior to the issues of the 1890s are rarely seen and can be considered institutional caliber when encountered,” according to auctioneers, who add this example, which is Lot 28031, is “evenly circulated with bright paper and deep inks.”

“Some pulls, a tear, and evidence of previous mounting are noted, but will not detract the die hard Canadian Charter collectors,” added auctioneers.

“Despite the time it spent in circulation it still displays bright inks and likely shown off by a previous owner many years ago.”

In Paper Money Guaranty (PMG) Very Fine-25 and previously mounted with an 9.5-millimetre bottom-edge tear, this note is expected to bring between $35,000 USD and $50,000 USD.

“King George VI, who on this note was still Prince Albert, Duke of York, is featured on this outstanding example in French text of the first issue of the Bank of Canada,” according to auctioneers, who describe this example, which is Lot 28024, as an “amazing, pack fresh example with excellent heavy embossing.”

“All French notes were printed with the F prefix, which according to a letter from the deputy governor of the Bank of Canada at that time, were subject to mutilation by the English speaking population. This French text version had a run of only 32,500 notes.”

It has a grade of Choice New-63 PPQ (premium paper quality) by Professional Coin Grading Service. 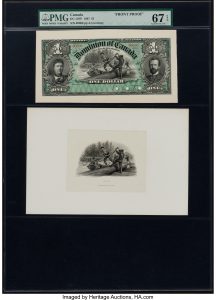 Three archival set of early Dominion of Canada proofs and vignettes round out the Canadian highlights. Each of the three lots is from the Feeling Good Collection and has a pre-sale estimate of $5,000 USD-$7,500 USD.

“The logging scene vignette on the 1897 Ace is one of the most iconic designs for Canada,” according to auctioneers. “An arched ‘DOMINION OF CANADA’ crowns the engraving, with the Countess and Earl of Aberdeen flanking each side. Uniface Proofs on cardstock of the front and back are included, graded PMG Superb Gem Unc 67 EPQ (exceptional paper quality) and Gem Uncirculated 66 EPQ. Each of the design elements, front, back, and the Countess and Earl are also included in individual vignette form, each on their own piece of card stock. The paper and stock on every item here is bright and attractive, unaffected by age.”

“This design featured a perfectly engraved fishing scene and was executed by the American Bank Note Co. (ABNC) location in Ottowa. The front and back designs are printed in black ink on two separate cardstocks. The face has three POCs along the signature line. They are graded PMG Superb Gem Unc 67 EPQ and Gem Uncirculated 66 EPQ respectively. Included are individual cardstock mounted vignettes of the fishing scene, farming scene from the back design, and Edward Prince of Wales.”

“This archival set is themed around the vignette of Princess Patricia of Connaught displayed on the Dominion of Canada one dollar banknote.”

Included is an ABNC approval proof along with three front proofs of the 1917 issue; two vignettes of the princess; a vignette of the Parliament building, which was featured on the back of the note; and a ABNC archive news photo of the princess modelling for the note. The vignettes and news photo are cased in holders from PMG and the front proofs on cardstock are graded Gem Uncirculated-66 EPQ and Gem Uncirculated-65 EPQ by PMG.