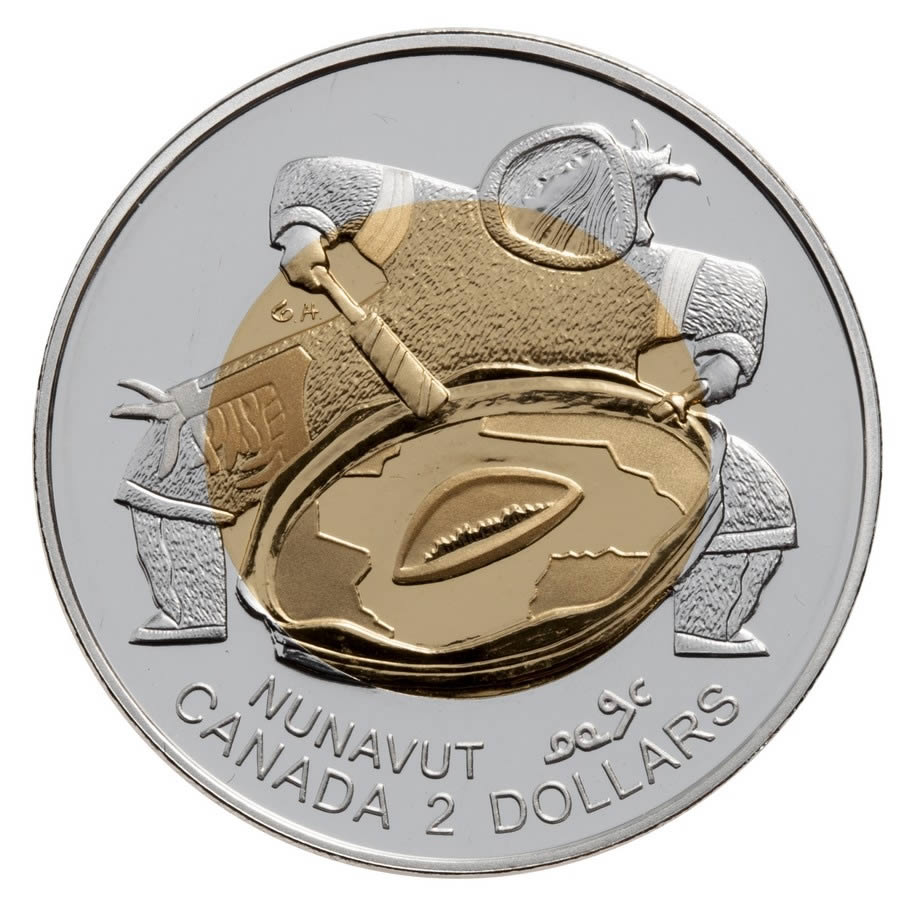 In 1999, to mark Nunavut's creation, the Royal Canadian Mint struck a $2 Proof gold coin (reverse shown) featuring an Inuit dancer with a drum bearing an outlined map of the newly formed territory.

On today’s date in 1999, Canadians from coast to coast celebrated the creation of Canada’s youngest territory, Nunavut.

That year, the Royal Canadian Mint struck a $2 Proof gold coin to mark the territory’s creation. Designed by First Nations artist Germaine Arnaktauyok, the coin’s reverse features an Inuit dancer with a drum bearing an outlined map of the territory. A stone lamp is depicted inside the map to symbolize warmth, security and hope for the future.

Struck with a white gold outer ring and a 22-karat inner core, this coin has a weight of 11.4 grams, a diameter of 28 millimetres and a mintage of 4,298 pieces.

In 2009, the Mint struck another 5,000 gold coins, these with a face value of $100, to commemorate the territory’s 10th anniversary. The coin depicts a hunter performing a drum dance with past and future generations symbolized by the faces above. This piece has a weight of 12 grams and a 27-millimetre diameter. 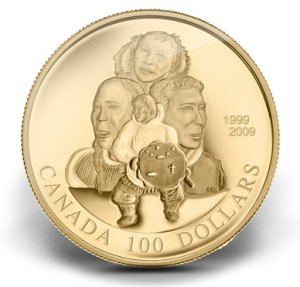 Another gold coin, this with a face value of $100, was struck by the Mint in 2009 to celebrate Nunavut’s 10th anniversary.

In 2012, a 14-karat gold coin was struck by the Mint with a limited mintage of 500 as part of its “Provincial Coat of Arms” series.

Nunavut’s coat of arms was granted by Governor General Roméo LeBlanc in 1999.

Created by Inuit artist Andrew Qappik in partnership with the Canadian Heraldic Authority and the elders and leaders of Nunavut, the territory’s coat of arms is a distinct blend of ancient Inuit symbolism and European heraldic tradition. Resting upon the shield is an igloo, which was essential to survival and represents the traditional way of Inuit life and the modern gathering of legislative members.

The territory’s status in Confederation is symbolized by the royal crown above. Holding the shield is a caribou and a narwhal. The motto is written in Inuktitut, which reads “Nunavut Sanginivut” (Nunavut our strength). 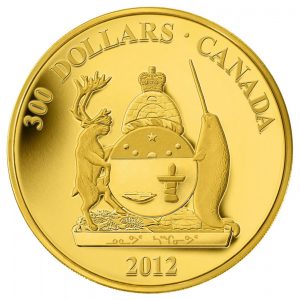 In 2018, the Mint issued its first collectible coin crafted entirely of Nunavut-sourced gold.

Also designed by Qappik, the reverse of this piece, dubbed “Symbols of the North,” highlights the walrus, ptarmigan, polar bear, bowhead whale and narwhal, each of which is framed within the outline of a maple leaf. In another innovation, the 10th-ounce gold coin was struck on newly developed blanks that were thinner and wider than previous coins but with the same relief, allowing for a larger canvas for the Arctic-themed design.

The obverse features the effigy of Queen Elizabeth II by Susanna Blunt.

More recently, a $20 coin struck with gold sourced from Nunavut was issued by the Mint in 2018.

“In anticipation of Nunavut’s 20th anniversary, the Mint is very pleased to celebrate the beauty and talent that Nunavut and its people add to the Canadian fabric,” said Chris Carkner, Mint vice-president of sales.

“From the responsibly-mined gold to the artist and his design, Canadians can be proud of this 100 per cent Canadian coin.”

The coin is crafted from 99.99 per cent pure gold mined in Nunavut at the TMAC Resources’ mine at Hope Bay and by Agnico Eagle Mines’ Meadowbank mine near Baker Lake, Nunavut.

“We are honoured that gold from our Meadowbank mine is part of the Royal Canadian Mint’s special Symbols of the North collectible gold coin,” said Sean Boyd, vice-chair and CEO of Agnico Eagle Mines. “Our Inuit employees, suppliers and partners can all take great pride in knowing that they have participated in making this unique coin that celebrates their heritage and culture.”